Of the many kinds of tea ceremony utensils, the tea caddy is considered the most prestigious. In the 16th century, Oda Nobunaga conferred a kind of political power on the tea ceremony when he instituted his “Tea Ceremony Policy.” As well as authorizing selected retainers to perform tea ceremonies, he ranked tea ceremony utensils for their aesthetic value. Ever since, the tea caddy has been the most esteemed of tea ceremony utensils. And the most highly prized of all tea caddies, to this day, are three specific katatsuki (“shouldered”) tea caddies—named “Hatsuhana,” “Narashiba,” and “Nitta”—recorded as the “Three Great Tea Caddies of the World” in the Yamanoue no Soji-ki, a book of secrets relating to tea utensils, authored by Yamanoue Soji, a leading disciple of famed tea master Sen no Rikyu.
The Takatori ware Miraku Kiln has done more than simply preserve the tradition of katatsuki tea caddies. It has elevated them to an even higher dimension, as the master ceramicists of Miraku have continued to refine their art from generation to generation.

The katatsuki (“shouldered”) tea caddies that so charmed famous warlords 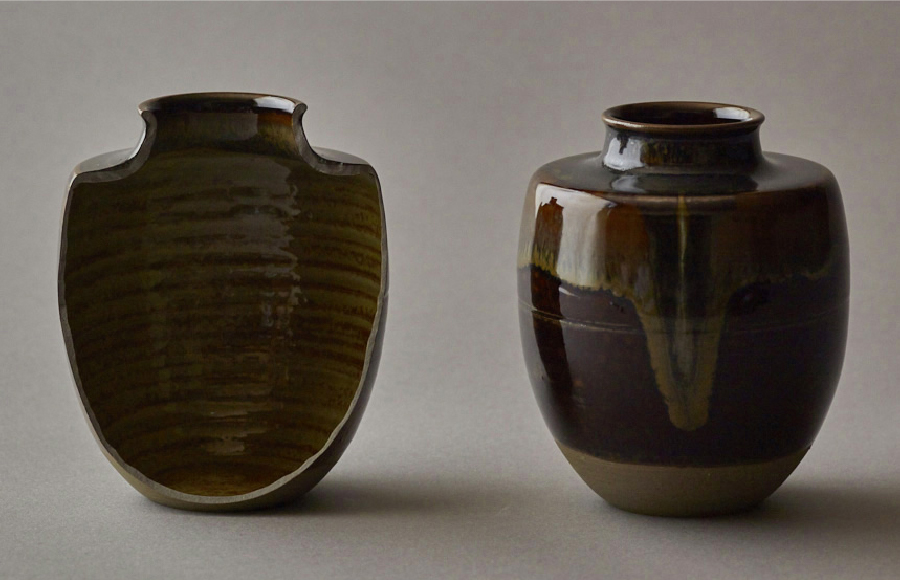 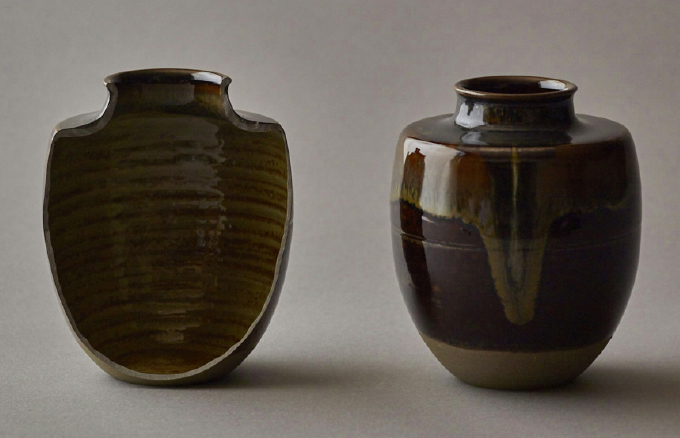 The “Three Great Tea Caddies of the World” are “Hatsuhana,” “Narashiba,” and “Nitta.” In the Sengoku period (1467-1615), these ceramic containers, brought to Japan from China, were regarded as cherished treasures by the numerous warlords fond of tea culture. Their value exceeded that of a feudal domain, and anyone who managed to get his hands on all three great katatsuki tea caddies would be justly considered ruler of Japan. In fact, although the pieces changed hands from one political figure of the period to another, including Oda Nobunaga, only Toyotomi Hideyoshi managed to possess all of them at once. One anecdote associated with this treasure relates to “Nitta,” which was reportedly damaged in the summer siege of Osaka Castle. On the order of Tokugawa Ieyasu, the pieces of the caddy were collected and repaired using lacquer, and today the caddy is stored in the Shokokan Bunko Library at the Tokugawa Museum.
The structure of this katatsuki caddy, which has survived numerous conflicts, is extremely fine and delicate.
The work is a mere 2 mm thick. Even by the standards of today’s pottery techniques, its thinness seems astonishing. 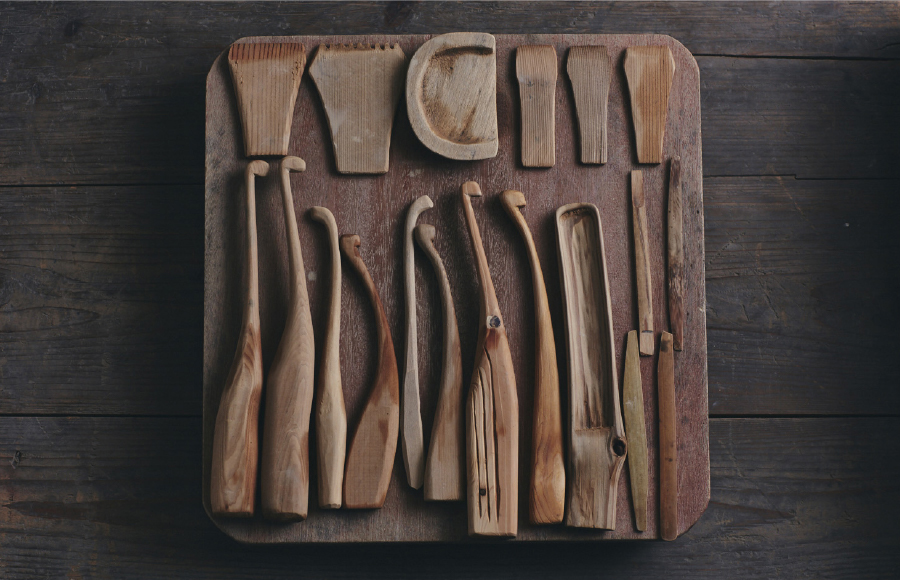 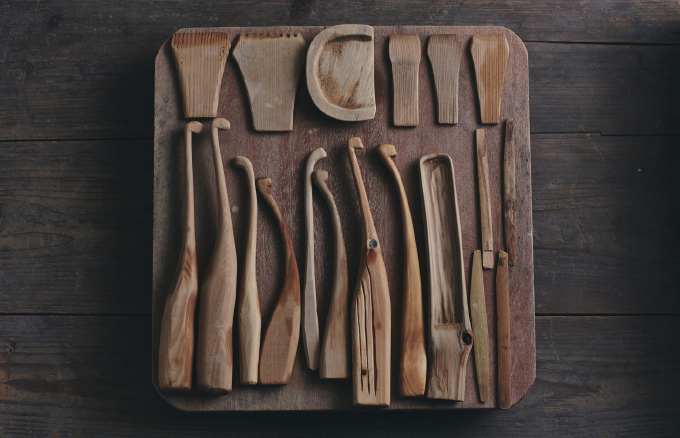 Takatori ware originates with the opening of a kiln to serve the Kuroda feudal domain, influenced principally by the tea ceremony culture that began in the Sengoku period (1467-1615) and the kirei-sabi aesthetic of elegance favored by daimyo and tea master Kobori Enshu, an active figure of the early Edo period. The essence of this tradition of ceramics is best appreciated in tea ceremony utensils, particularly katatsuki (“shouldered”) tea caddies. Like the classic masterpiece “Hatsuhana,” which passed through the hands of various rulers, the value of katatsuki works lies in their thin structure. As mentioned, the “Hatsuhana” tea caddy boasts a thickness of just 2 mm or so, but the katatsuki works produced by Miraku Kamei XV are even finer: just 1.5 mm thick.

In addition to preserving traditional techniques, the Miraku Kiln continues to refine the art of such ceramics by tackling new challenges on a daily basis, to discover new ground beyond the limits of preceding masters.
Today, in the 2020s, we are fortunate to be able to appreciate tea ceremony ceramics even greater than those of even Hideyoshi and other powerful connoisseurs of old. 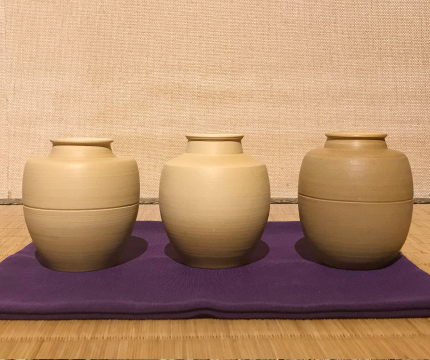 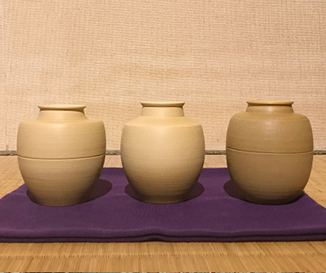 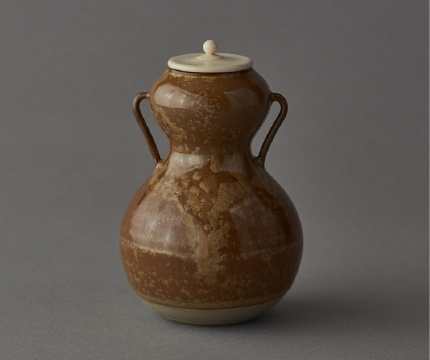 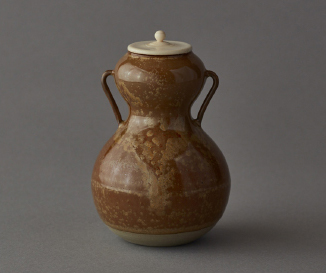