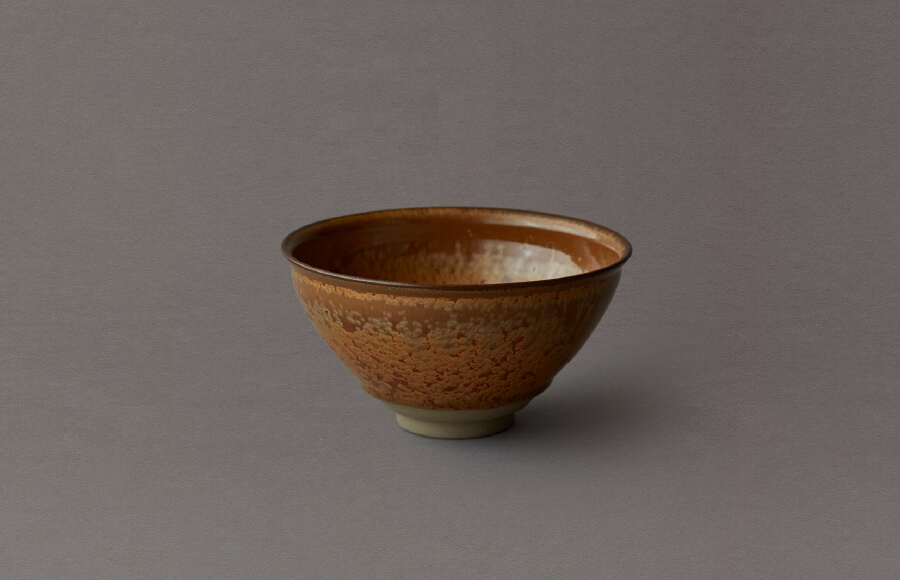 It is commonly thought that the tea ceremony is all about the etiquette of drinking tea, but originally it was a leisurely affair lasting around four hours, involving a kaiseki (tray) meal as well as tea-drinking. The enjoyment of a meal and tea is an ordinary part of life, or “as commonplace as tea and rice” (nichijo sahanji) as the Japanese expression goes. Nonetheless, the host gives serious consideration to the enjoyment of invited guests, thoroughly preparing the particular day’s proceedings in detail, reflecting on the appropriate cuisine, hanging scroll, flowers, and tea utensils for serving and for decorating the space in accordance with the season. At the same time, guests strive to be as aware and appreciative as possible of the host’s intentions and sensibility, invoking all five senses. It is an occasion for people to join, with respect and sympathy for each other, in harmony to enjoy an intimate, tranquil meeting of hearts and minds. As far as possible, the tea space needs to be simple and unadorned, in keeping with the delicate purity of this time. In this sense, the relationship of the tea house to the tea ceremony participants is akin to that of a Zen temple to Zen monks. In the “The Book of Tea,” a modern-era treatise by philosopher Okakura Tenshin, the tea ceremony is described as follows.

“Teaism is founded on the adoration of the beautiful among the sordid facts of everyday existence. It inculcates purity and harmony, the mystery of mutual charity, the romanticism of the social order… It is essentially a worship of the imperfect, as it is a tender attempt to accomplish something possible in this impossible thing we know as life.”

Through the ordinary actions of eating a meal and drinking tea, people can conjure the “extraordinary,” as a communion of finely honed sensibilities. This is something that runs through the philosophy of Zen. In fact, the “way of tea” is thought of as a Zen development of tea etiquette, and it has consequently come to be considered a form of spiritual culture; one that is very representative of Japan.

Ichigo Ichie – “one time, one meeting”

The deeply felt Japanese expression ichigo ichie, literally meaning “one time, one meeting,” is very widely known nowadays, even far beyond Japan. The expression originated in a tale by Yamanoue Soji, a leading disciple of Sen no Rikyu, and was later included in a publication by Ii Naosuke, titled “Chanoyu Ichie Shu,” “Collection of Writings for the One-Time Tea Gathering.” Eventually the expression came to be associated closely with the spirit of tea. “Today will never come again, so this tea ceremony is a once-in-a-lifetime experience.” The host is therefore compelled to prepare well, cleaning and tidying the garden and tea space, and serving the guests using carefully selected tea utensils.
The tea ceremony is broadly divided into two halves. In the first, shoza, a kaiseki meal featuring one soup and one vegetable dish is served; in the second session, goza, the guests are served “thick tea” (koicha) and “thin tea” (usucha). The climax of the ceremony is the drinking of the koicha in the second session. For koicha, matcha (powdered green tea) is prepared for all the guests in the same bowl. Each of the guests drink the tea from the same bowl in turn. Although the etiquette for drinking this “thick tea” is strict, the tension this creates enhances the experience by heightening alertness and sensitivity, helping to create a sense of oneness amongst all the participants.

For each tea ceremony, a theme is decided, in accordance with the season or occasion. In the case of the Tanabata (Star) Festival, for example, the themes that come to mind are the characters of Orihime and Hikoboshi, bamboo grass, and the Milky Way. The host might take inspiration from these motifs when choosing the tea caddy, flower vase, hanging scroll, and incense container for the ceremony, with the aim of building a story to stimulate deeper conversation. The guests, for their part, will try to appreciate the carefully selected tea utensils, to listen carefully for the stories they may reveal, and to discover delight in their elegance and playfulness. “I am so pleased to have been invited for this tea ceremony today.” Tea ceremonies are orchestrated to leave guests with this feeling, and tea utensils can play an important role in the overall art.